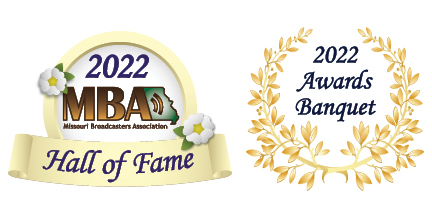 “Our broadcasters continue the proud tradition of serving the citizens of our great state with immediate, trusted, local sports, news and entertainment. We are honored to be able to recognize their achievements,” said Mark Gordon, Missouri Broadcasters Association President and CEO.

This year, for the first time ever, we held a separate ceremony and banquet for our five 2022 Hall of Fame inductees on Friday, June 10th. The inductees include:

On Saturday night, more than two hundred awards were presented to radio and TV stations during the MBA Awards ceremony, including Station of the Year presentations to KFKF-FM in Kansas City, and KMBC-TV, also in Kansas City.

Finally, as a surprise, MBA President and CEO Mark Gordon presented the President’s Award to our Director of Member Services, Terry Harper. On stage, Terry addressed the crowd of MBA members, saying: “I really do enjoy my job and getting to serve you guys”.

For professional photos taken at both the Hall of Fame and MBA Awards Banquets, click here.

For a complete list of 2022 MBA Award winners, visit this page.

For video/audio files of all 2022 winning entries, click here.

For information on duplicate awards, visit this page.

For complete bios on our 2022 Hall of Fame inductees, visit this page.

For the privacy policy on images/videos taken at our events, please read the “Media Disclaimer for Events” on this page.