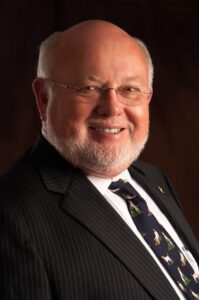 Russ Withers started his broadcasting career in Missouri in 1956, as an on-air announcer at KGMO in Cape Girardeau. After moving to Illinois, he returned to Missouri in 1972 and founded Withers Broadcasting Company. The company grew to own and operate 30 radio stations and 3 TV stations. During his 54-year career, Russ served in leadership positions on a variety of industry boards, such as the National Association of Broadcasters, the Library of American Broadcasting, and the Associated Press Broadcast Board, among others. Over five decades of promoting progress in the industry led Russ to earn a reputation as a respected broadcasting leader before passing away in 2014.