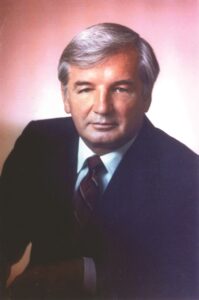 Ray Karpowicz has long been recognized as an effective and positive leader in the broadcast industry as well as the city of St. Louis.

A native of Madison, Illinois, his leadership abilities were honored early in life when he won the Distinguished Flying Cross and Air Medals as a member of the U.S. Army Air Corps during World War II.

After graduating from the University of Missouri, Columbia in 1949 with a B.S. in Business, Karpowicz entered the broadcasting field as a salesman with the former WTMV Radio, in East St. Louis, Illinois.

Two years later, he became sales manager at WEW Radio in St. Louis and made the switch to television in 1955 as an account executive at KTVI-TV.  In 1956 he joined NBC affiliate KSD-TV (KSDK), Channel 5 as an account executive, where he remained until his retirement in 1982.     Karpowicz was named sales manager in 1960 and became general manager in 1969.  Ten years later, he took over as head of the half-dozen outlets in the Pulitzer broadcast group, who owned KSD-TV at that time.

Insisting on complete, thorough and in-depth news coverage, Karpowicz pioneered the two-hour television news concept by programming nightly news broadcasts from 5 to 7 pm.  He launched the first noontime newscast in St. Louis in 1969.  During his reign, KSDK-TV produced 18 hours of local news each week.  He was also instrumental in developing sports at Channel 5.  He brought Cardinals baseball to his station in 1962.

His commitment to St. Louis is evident in two cooperative campaigns he helped launch.  The “A to Z” media campaign promoted the positive values of St. Louis as a good place to live and work using TV, radio, print and outdoor venues.  The campaign was a first place winner in the Public Relations Category in the 1976 9th District Addy Awards Competition.   He was also the driving force in a public service campaign to support all of the St. Louis professional sports teams with other St. Louis television stations.

Karpowicz received the Missouri University School of Journalism’s highest award, the Missouri Honor Award of Distinguished Service to Journalism, in 1978.  The award citation lauded “…his personal standards which have led him deeply into the civic life of his community, and the leadership of causes which have enriched the lives of the city’s underprivileged.”

Karpowicz provided KSDK’s facilities for the St. Louis Variety Club’s annual telethon benefitting the emotionally and physically handicapped children of St. Louis.  KSDK also became the St. Louis outlet for the Muscular Dystrophy Association’s annual Jerry Lewis Labor Day Telethon in 1974.  There were many instances when he donated proceeds from sports telecasts or purchased tickets for sporting events and gave them to organizations such as Big Brothers.

Karpowicz served on the Board of Delegates for NBC and served on numerous boards and advisory councils for St. Louis organizations and the University of Missouri.