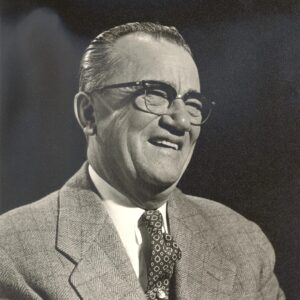 Ralph David Foster (April 25, 1893-August 11, 1984) was an American broadcast executive and philanthropist who created the framework for Springfield, Missouri to challenge Nashville as the nation’s top country music capital during the 1950’s.  His KWTO-AM radio station in Springfield was a springboard for many top country artists.  Foster’s many music businesses led to the creation of “Ozark Jubilee,” the first U.S. network television program to feature the stars of country music.

Ralph Foster was an avid hunter and fisherman and a strong conservationist.  He collected Native American and Western artifacts and firearms for many years.  In the 1960’s, he donated a large collection to the School of the Ozarks in Point Lookout, Missouri near Branson.  In 1969, Foster’s financial donations brought about the addition of a new wing, a new entrance and a new name: The Ralph Foster Museum, which focuses on the history and culture of the Ozarks region.