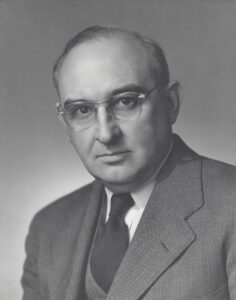 Oscar Hirsch is known as one of America’s first, true broadcast pioneers. He was born
February 23rd, 1896 in Cape Girardeau, Missouri. At the age of 17, he joined the First Presbyterian Church of Cape Girardeau, where he eventually served as deacon and elder. He then made his move into the world of broadcasting, launching KFVS-AM (now KZIM-AM) on July 22nd, 1925 out of his living room. A crowd of hundreds gathered at his home to witness the historic event, even resulting in a closure of the street to traffic. That first broadcast consisted of orchestra music, it lasted less than two hours, and the signal reached an approximate 300 to 400-mile radius.

Oscar made the jump into television broadcasting in 1954, founding and securing a license and FCC approval to launch KFVS-TV, the first television station serving southeast Missouri and southern Illinois. It was an accomplishment he later said was his greatest achievement. Prior to the establishment of the TV station, people in the area had used tall antennas to get signals from St. Louis or Memphis, with poor reception at best. Then in 1960, construction was completed on a new 1,676-foot tower for the station, making it the tallest structure in the world at the time.

Hirsch’s many accolades include a 1979 resolution from the Missouri House of Representatives, a 1982 American Library Trustees Association Award, and a Life Membership Award from the Salvation Army in 1983. He was also named an honorary member of the Southeast Missourian Hospital board, and a Gold Arrow Partner in the patrons’ project of the “Million Dollar Club” of the Southeast Hospital foundation. In 1983, Cape Girardeau honored him by designating March 21st as Oscar Hirsch Day. Then in 1990, he was the recipient of one of the first ever Rush H. Limbaugh Sr. Awards given by the city’s Chamber of Commerce “in recognition and appreciation for his immeasurable contributions and many years of sustained community service.”