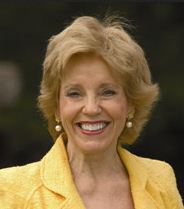 Norma Champion is best known as “Aunt Norma” to most long-time residents of the Ozarks.  From 1957 to 1986, Champion was the writer, producer and host of The Children’s Hour, a top-rated commercial television program on KYTV in Springfield.

Champion accidentally auditioned for the show and soon became a household name as she entertained and mentored thousands of children through the Children’s Hour.  She performed the show live, 5-days a week for 13 years, before it was moved to Saturdays.

Champion was named as one of the 10 Most Influential Women by the Springfield Business Journal in 2005. As she reflected on her time as “Aunt Norma” she said, “While the show did provide entertainment for children in the Ozarks, my primary goal for the program was educational.  It was important to me that the show serve as a vehicle to instill positive character traits and a giving attitude in the viewers.  I especially stressed that they could be tomorrow’s leaders.  How affirming it has been to hear many local leaders stress how influential the show was to them during their developmental years.”

Education was so important to Champion that while her own children were in school, she returned to college where she earned her bachelor, masters, and Ph.D. all while fulfilling the roles of wife, mother,  college professor, and Aunt Norma.   Dr. Champion was a professor of broadcasting and communication theory at Evangel University in Springfield from 1978 until 2010.

After nearly 30 years on KY3, Champion didn’t let the cancellation of the Children’s Hour end her public service.  She began her career in politics as a Springfield City Councilwoman from 1987-1992.  She ran for a Republican seat in the Missouri House, where she served for 10 years and finally served as a Missouri State Senator from 2003 to 2010.    She was chair of the senate committee which addressed legislation relating to public and mental health, senior citizens, families and children and also served as vice-chair of the Education Committee.   One of her proudest accomplishments involved the name change of Southwest Missouri State University to Missouri State University, which involved overcoming 19 years of vocal opposition and an all-night filibuster on the Senate floor.

Last year the “Children in Crisis Tax Credit” was renamed the “Champion for Children Tax Credit” to acknowledge Champion’s previous work on this legislation as well as her legacy as an advocate for Children’s issues.

Champion grew up in Norman, Oklahoma and was married to Rev. Richard Champion until his death in 1994. She retired in 2010 and was remarried in 2012 to Michael Gollub.

A Facebook page was established in 2010 entitled “Growing up with Children’s Hour and Aunt Norma.”  Fans can view vintage photos and video from the program including a music video created and written by Springfield musician Nick Sibley to celebrate Champion’s 25th anniversary on Children’s Hour.

Champion has a long list of honors and awards including a Lifetime Membership Award from the Missouri State Parent/Teachers Association in 1989, the General Superintendent’s Medal of Honor from the Assemblies of God in 2009, and she was presented the Keys to the City on “Aunt Norma Day in Springfield” in 1976.  Aside from her many accomplishments as an educator and politician, she is fondly remembered and loved by thousands of people who grew up with “Aunt Norma”.