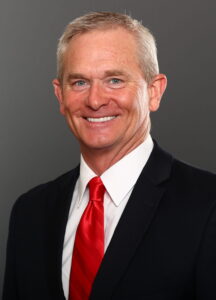 Holthus is also the host of the Hy-Vee Chiefs Insider television show and the Chiefs Rewind Post Game Show featured on several digital platforms. In addition, he originates the “Minute With Mitch” radio and television series, which is seen and heard in five states. His work is also featured on the Chiefs.com website.

Following the NFL season, Holthus is a television play-by-play announcer for college basketball. His work has been featured on the ESPN family of networks, FOX Sports, and other national outlets.

Along with being inducted into the MBA Hall of Fame, Holthus is also a member of the Kansas Association of Broadcasters Hall of Fame, and the Kansas State University Athletics Hall of Fame. He is now only one of three individuals in both the KAB and MBA Halls of Fame, joining his former broadcast partner Len Dawson and the late Fred White.

Holthus has won four Emmys for his video and online work by The Academy of Television Arts and Sciences. In addition, he is a past recipient of the Kansas City Sports Journalist of the Year. In 2018, he was listed with the voice of the Royals (Denny Matthews) as one of the top 13 “One-Two” play-by-play pairs in America by the Sports Broadcast Journal. He was also named the 2020 Missouri Sportscaster of the Year and has been the Kansas Sportscaster of the Year eight times.

He has served on the Board of Directors of the National Sports Media Association and is a past president of the organization. Holthus has two degrees from Kansas State University, one in journalism and another in business administration.

He and his wife Tami, who is originally from Mcpherson, KS have a son and daughter and two granddauters.