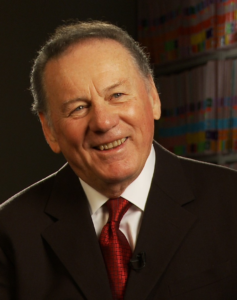 Leonard Ray “Len” Dawson was born June 20, 1935 in Alliance, Ohio, the 7th son of a 7th son. Len excelled in High School football, and after choosing to attend Purdue over Ohio State, he went on to an outstanding college football career, throwing for over 3,000 yards in three years and leading the Big 10 Conference in passing each year. During his college years, he began a friendship with Boilermaker assistant coach Hank Stram that would last more than half a century.

Dawson was the first round draft pick of the Pittsburgh Steelers in 1957. Two years later, he was traded to the Cleveland Browns. In both cities, he was a backup quarterback without much playing time. After speaking with Stram, now the head coach of the Dallas Texans in the AFL, Dawson asked the Browns to release him. In his first season with the Texans, Dawson and Stram teamed up to lead the Texans to an AFL Championship in 1962.

Dawson, Stram and the Texans moved to Kansas City in 1963 and became the Kansas City Chiefs. Dawson quarterbacked the Chiefs to the very first Super Bowl (then called the AFL-NFL World Championship Game) in 1966, and brought a Super Bowl IV victory to the Chiefs in 1969, a game in which he was named MVP. From 1962 to 1969, Dawson threw more touchdown passes (182) than any other professional quarterback. He was named NFL Man of the Year in 1973 and retired from the Chiefs in 1975.

While still playing for the Chiefs, Dawson became Sports Director of KMBC-TV in 1966. He would finish football practice at 5 o’clock and then do a sports report on the 6’oclock news. His on-air presence bolstered awareness for the Chiefs and ticket sales flourished.

In 1985, Dawson began serving as color commentator for the Chiefs Radio Network, a role he served in until he retired from the position following the 2017 season. He also worked with Mitch Holtus and former Chiefs player Kendall Gammon.

In 1987, Dawson was inducted into the Pro Football Hall of Fame by his longtime friend and former head coach Hank Stram. That same year Kansas City Magazine named him “Best Kansas City Sportscaster.”

Dawson was awarded the Walter Camp Distinguished American Award in 2008. In 2012, Dawson was honored with the Pete Rozelle Radio-Television Award for his contributions as a sports broadcaster.

Len and his wife lived in Kansas City, where Len was active in the community and focused much of his energy on charity work. This included raising money for a number of local organizations, especially those helping needy children.