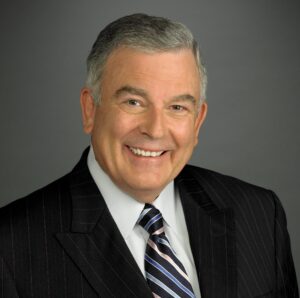 Larry Moore, currently anchor emeritus for KMBC-TV in Kansas City, has served for more than 40 years as primary news anchor and editor for KMBC-TV9 news at 5, 6, and 10 p.m. For most of those years, his newscasts ranked #1 the market. Larry holds the distinction of having anchored the news for more years than anyone in Kansas City history. He is often referred to as “Mr. Kansas City.”

A native of Missouri, Larry grew up near Kirksville in northeast Missouri. He is a graduate of the University of Missouri with a Master’s Degree in Television News. Throughout his broadcasting career, Larry has covered almost every major news story in Kansas City and has received over 120 awards for distinguished journalism, life achievement and outstanding humanitarian service to the Kansas City community.

He and his wife, Ruth, have been married more than 50 years. They have five children and six grandchildren and they make their home in Cass County.