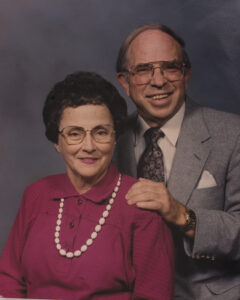 Founders of Meyer Communications, which currently owns five radio stations in Southwest Missouri, KWTO-AM Jock 98.7, KBFL-AM & FM and KTXR-FM. Their company was formed in 1964 and previously owned radio stations in Kansas City, Fulton, and Kennett in Missouri, as well as stations in Amarillo, Texas and Montgomery, Alabama.

They signed on the first UHF television station in Southwest Missouri, KTMC (now KOZL) and they also owned KARD-TV in West Monroe, Louisiana. Their success in broadcasting has allowed them to generously give back to their community through the Kenneth E. and Jane A. Meyer Foundation. Their gifts have focused on higher education, the arts and various health organizations.

Jane passed away in 2002, however, her influence in the company is still felt today. Ken has told friends and business associates that, in honor of KTXR’s radio frequency, he has every intention of living to 101.3! He retired from managing the stations, following their sale in the fall of 2020, and he passed away in 2022 at the age of 94.