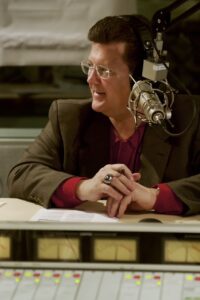 John Rooney was born in Cameron, Missouri on January 30th, 1955. He started his broadcast career on August 21st, 1971 at KLEX in Lexington, Missouri, marking 2021 as his 50th year in broadcasting. In 1977, he went to work for Clyde Lear as the first Sports Director at Missourinet News Network In Jefferson City. He delivered daily sports update shows and covered the Missouri Tigers, in addition to doing play-by-play of Tigers football and basketball games.

Rooney is best known as the play-by-play announcer for radio broadcasts of the St. Louis Cardinals. He came to St. Louis following 18 years with the Chicago White Sox from 1988-2005. The Cardinals World Championship crown in 2006 gave John the privilege of working with the World Champion team in back-to-back seasons, following the White Sox win in 2005.

Rooney called his first major league game in 1983 with Mike Shannon and Hall of Fame Broadcaster Jack Buck during a three-game series between the Cardinals and host Cincinnati Reds. He began his baseball broadcasting career at the class AAA level, spending the 1981-82 seasons with the Oklahoma City 89ers, and the 1983-84 campaigns with the Louisville Redbirds.

John juggled two stints in the 1980’s as a sports reporter for KMOX around his baseball broadcasting, and serving as the voice of Missouri Tigers football and basketball on radio and TV for 20 seasons. Rooney’s National Assignments over the years include the MLB Division Series, League Championship Series and World Series, Saturday Afternoon and Sunday Night Baseball for CBS Radio, the Fox TV Saturday Baseball Game Of The Week, and ESPN Radio Saturday and Sunday night baseball assignments. Rooney has worked 20 MLB All Star Games on National Radio, called NFL games on CBS and Sports USA Radio, and he has broadcast 19 NCAA Tournaments on the National Radio Network, including 10 National Championship Games.

Over the years Rooney has been an announcer on various college basketball telecasts including the Big 10, Conference USA, Big East and has been the Voice of the Missouri Valley Conference telecasts for five seasons. He has broadcast College Football Bowl Games including the Cotton, Orange, Fiesta, Sun, Independence and Capital One Bowls.

In addition to working at KLEX in Lexington, Rooney also worked at Missouri stations KFRU in Columbia, KLIK in Jefferson City, and KMOX and KTRS in St. Louis. He was inducted into the Missouri Sports Hall of Fame in February 2004, and he is a recipient of the 2018 Tom Hammond National Sports Media Award presented by the Kentucky Bluegrass Sports Commission. He and his wife, Susan, have two daughters: Colleen and Rachel.