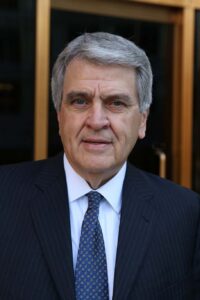 John David is at the pinnacle of an illustrious career that began with a love affair with radio as a 13-year-old in Poteau, Oklahoma. John would sit around for hours at the local station just to read the weather forecast. With time, he would become one of the most influential people in the radio profession, serving as Executive Vice President of Radio at the National Association of Broadcasters, before transitioning to Senior Advisor to the NAB in 2018.

A graduate of Oklahoma State University, John began his on-air career at KLCO in Poteau. From there he went on to KVRO, Stillwater; KREK, Sapulpa; KMUS, Muskogee; and KOMA, Oklahoma City, in 1965. Then in 1971, at the young age of 24, John moved into ownership with the purchase of KFSB in Joplin, MO. He and his partner, Richard Chegwin, later acquired two FM stations in the area. Following the death of his partner, the stations were sold in 1988. John’s career has truly touched all aspects of the business, on-air, news, sales, promotion, and management.

In 1989, John joined the Government Relations Department of the NAB and, in 1992, was named Vice President of Radio and later elevated to Executive Vice President. Soft-spoken and quick-witted, he is just as comfortable dealing with the nation’s most powerful radio people or the owner of a 1,000 watt station, and both will receive the same openness and respect.

The love affair with radio that began as a 13-year-old has continued in all his endeavors. John David is synonymous with excellence in radio