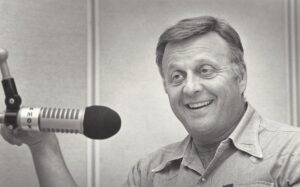 Jack Carney was born in Los Angeles on August 23, 1932.  He attended UCLA, where he studied law until, out of curiosity, he took radio classes, eventually abandoning law for a career in radio.

Carney’s radio career began in New Mexico in 1951.  He moved through several small market stations in the southwest before becoming well known as a rock n’ roll DJ serving up hits to teenagers in Phoenix, Milwaukee, Atlanta and Boston.

Carney arrived in St. Louis in 1958 as a rock n’ roll DJ on WIL.  Six weeks after he joined the staff, his sense of humor and bizarre stunts brought WIL from #7 to #1 in St. Louis.  Carney invented a character named Pookie Snackenberg, who became a hero with St. Louis teens.  Carney once asked his listeners to pull the tuning knobs off their parents’ home and car radios so the dial couldn’t be moved from WIL.

Carney’s ratings success at WIL brought about a job offer from WABC and he was off to New York City in 1960.  This proved to be a bad move for him.  He only stayed a few months in New York and then left for a stint of West Coast radio jobs.

Carney returned to St. Louis in 1971, taking over the KMOX morning spot from Jack Buck.  He was an instant success.  The Jack Carney Show ran from 9 am to noon and made Carney a legend as a St. Louis entertainer and live-commercial pitch man.  St. Louis Post-Dispatch broadcast critic Erik Mink said, “The effectiveness of Carney’s commercials was due to his mastery at weaving them into the fabric of his program.  The two elements were so intimately intertwined that often it was impossible to tell where the program stopped and the commercial began.”

During his KMOX years, virtually every celebrity that passed through St. Louis stopped by to say hello to Jack Carney.  He completely dominated morning radio and became a fixture in the St. Louis community for over 13 years.