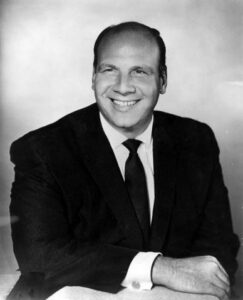 On April 28th, 1959, a new television station signed on the air with its debut broadcast of the St. Louis Cardinals versus the Cincinnati Reds.  After a ten-year struggle with four competing groups, Harold Koplar’s tenacity paid off, and KPLR-TV was born.

Harold Koplar (or “HK” as he was affectionately known) was a true visionary, and KPLR embodied his vision at its best.  KPLR was conceived of as platform to showcase the performers that regularly played the famous Chase Club in his family’s landmark Chase Park Plaza hotel.  Built in 1929 by his father, Sam Koplar, the hotel featured such stars as Bob Hope, Bing Crosby, Lucille Ball and Frank Sinatra.  HK wanted to bring these world-class acts to the entire city via the relatively new medium of broadcast television.

As an independent station without the benefit of network shows, KPLR was ever in need of programming, and HK set to work filling its schedule with compelling and innovative content. His love of Cardinal baseball led him to strike a deal with his friend Gussie Busch to carry the team. As the home of the Cardinals, KPLR became a St. Louis icon overnight.  In addition to sports, KPLR was at the forefront of children’s programming. HK created a memorable kid’s show with the help of his old friend and vaudevillian actor, Harry Fender. When Fender agreed to the job, Koplar dressed him as Mark Twain, put a showboat set behind him, and the new “Captain 11 Showboat” sailed the St. Louis airwaves.  Every Brownie and Cub Scout troop waited for months for the chance to appear on live television, with audiences of doting parents and grandparents looking on.  Kids were also excited to meet regular guests Moe, Larry and Curly, whose infamous “Three Stooges” became a mainstay of the KPLR programming line-up.

Ever striving to enhance his local programming, Harold’s theatrical flair prompted him to introduce his brand new Khorrasan Ballroom in an unusual way.  Always the entrepreneur, and with an architectural degree from the University of Illinois, Harold used an innovative technique in designing the nation’s first ballroom sans pillars. He created the broad-ceilinged arch utilizing empty baby food jars and ping-pong balls. Under this unique floating archway of twinkling starry lights, he debuted “Wrestling at the Chase,” which became a St. Louis institution.  Joe Garagiola provided commentary while “Dick the Bruiser” and “Gorgeous George” pummeled their opponents under the glimmering lights, before capacity crowds dressed in elegant gowns and tuxedos.

In addition to his business pursuits, HK took an active role in civic affairs. He was president of the Hotel Association of St Louis, a trustee of the Jefferson National Expansion Memorial Association, and served as Chairman of the Damon Runyon Memorial Fund for Cancer Research. He was a board member of the St. Louis Symphony, housed in the elegant former Powell hall, which was also built by his father, Sam.  He started the St. Louis branch of the world-wide Young President’s Organization, and in 1956, and was named French Consulate of St. Louis, an amazing feat considering he could not speak French!

Harold married his beautiful and loving wife Marie Lauer in 1941.  He was a proud father of three: Robert, who was President of the Chase Hotel for several years until his untimely death in l977; Ted, who became president of KPLR in 1979; and Susan Brown, who, along with her family, owns and operates the Lodge of the Four Seasons, the Lake Ozark resort built by HK.   Koplar passed away at age 70 in 1985.