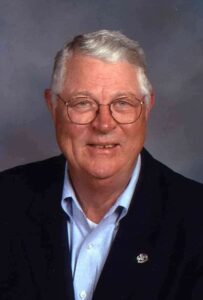 Gene Millard was born on a small family farm near Osborn, MO. He received his Associates in Arts Degree from Graceland College in Lamoni Iowa in 1961, followed by a Bachelor of Science degree in General Agriculture from Colorado State University in Ft. Collins in 1963. After dispatching trucks for nine months, he was hired as Assistant Farm Director for KFEQ radio and Television in St. Joseph in May of 1964. Gene continued to farm and radio broadcasts at KFEQ until he was asked by the owner, Bob Schmidt, in 1976 to become the General Manager of the station. As GM, Gene tripled the revenue with a focus on Agricultural revenues and with the assistance of a terrific staff, built KFEQ as the most respected farm station in the region.

In 1999, Gene was appointed Vice President of Eagle Radio, Inc., in charge of radio stations KFEQ, KSJQ, KKJO and KSFT, and the Ag Info Center Networks. Also, in 1999 Gen was presented The Distinguished Broadcaster Award by the Missouri Broadcasters Association. He retired from Eagle Radio in 2003 to be a marketing consultant for the NAFB, as well as an operator of a 1200-acre corn, soybean and cattle farm with his son, Brian in Osborn. This is the same farm Gene’s great grandfather acquired it first parcel in 1905 and was recognized as “A Century Farm” in 2005. Even in retirement, Gene continued to host “Agri-Shop,” a live, one-hour radio show every Saturday on a 15 station/4 state network. Gene delights in talking with callers and inspiring commerce across a multistate region.

Gene was inducted into the National Association of Farm Broadcasting’s Hall of Fame in 2010. Since 2008, has served as Chairman of the Board of Golden Triangle Energy LLC in Craig, MO, which produces industrial and food grade alcohol, ethanol fuel and DDG’s. For nearly 30 years, Gene has been on the Board of Directors of Citizen’s Bank and Trust, with headquarters in Kansas City and banking facilities in over 20 Northwest Missouri communities.

Gene and his wife, Sharon are the proud parents of four daughters and two sons. They have nine grandsons and one granddaughter.

His whole professional career, Gene Millard has strongly defended the value of farm radio. He continues to be an innovative supporter of value-added agriculture. He loves the land and the people of rural Missouri and has been of immeasurable worth to radio broadcasting in Missouri. For this reason, we honor Gene Millard as a 2019 inductee into the Missouri Broadcasters Association’s Hall of Fame.