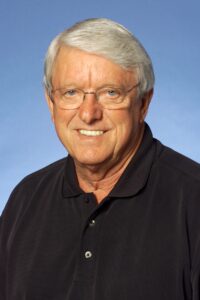 Fred White was born in 1936 and was raised in Homer, Illinois. He attended Eastern Illinois University in Charleston. His broadcasting career began at WTTY in Danville, Illinois. After moving to Hastings, Nebraska, White settled in at WIBW in Topeka in 1966, where he did both radio and TV work. Kansas State University sports were part of his duties. Fred became the voice of K-State athletics in 1967, and held that distinction until 1973. Fred also rose to the position of Sports Director at WIBW-TV.

Some of his early broadcast experiences provided humorous memories. Like the demo tape he sent to the Kansas City Royals in 1969, the year the expansion franchise was launched. “I had never really taped a major league game,” White said. So, I sent them a tape of one of the American Legion games I did in Hastings, Nebraska. Never heard back from them.”

But in 1973, when the Royals moved into their new stadium and Fred was still working at WIBW, the Royals offered White the breakthrough he cherished. “Before the ’73 season, they called me and said they wanted to have a third guy when they televised games,” White recalled. “They came to Topeka and wanted to know if I’d be interested, and I think I pinned the guy to the restaurant floor. Yeah, of course, I was interested. So I started doing games-40, 45 games were all they televised. That’s how it all started, part-time stuff in ’73, and it ballooned from there.”

Fred White became best known for the many years he spent with Denny Matthews as the Royals primary broadcast team. Fred’s final season in the booth in the 1998 season marked 25 years they were on the air together, making them the longest running broadcast team in the history of the American League. If a calculator was put to task, it could be said that White and Matthews did approximately 4,050 games together, or, based on an average three hour game, the two logged about 12,150 hours of play-by-play. For a quarter of a century, Denny and Fred formed an unforgettable bond with Royals fans.

In those 25 years, Fred White helped call 6 division championships, an American League pennant in 1980 and the Royals first World Series championship in 1985. White’s memorable Royals broadcast moments include (calling) George Brett’s classic home run off Yankees’ Goose Gossage in the 1980 postseason and Brett’s 3,000th hit in 1992 against the Angels in Anaheim. White also called Bo Jackson’s first big league home run in 1986 saying, “I mean he crushed it. That might be the longest home run hit in Royals Stadium!” And, at 475 feet, it was.

Even though Fred White was known as one of the voices of the Royals, he gained much notoriety for his outstanding television work in college basketball and football for CBS, ESPN, NBC, TBS and Raycom Sports. In addition to his work at Kansas State, White was the main TV announcer for University of Illinois basketball. He also did national TV games for both Atlantic Coast and Big 8 Conference basketball. White has been named Kansas Sportscaster of the Year several times.

Upon leaving the Royals broadcast booth in 1998, White headed up the Royals radio network, supervised the Royals Alumni group and was the Director of Broadcast Services and Royals Alumni. One day before his death in 2013, the Royals announced Fred White’s retirement after 40 years with the organization. He passed away at age 76, two weeks before his 77th birthday.

Fred White said the big break the Royals gave him in 1973 was “a lifelong dream, a team on the rise, a new stadium being opened, George Brett, Hal McRae and Frank White joining the team, I felt I’d died and gone up the first steps to heaven.”