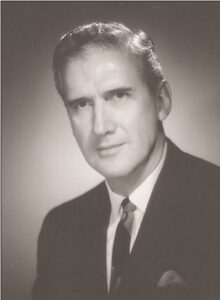 Born in What Cheer, Iowa, in 1910, Ed Lambert had an early fascination with the airwaves and the world of broadcasting. At the age of eight his father started manufacturing the “Lambert and Sons” Crystal Radio. The workings of the radio were set inside a green cardboard box with a small needle-like tuner on the outside. It was labeled with the Lambert name yet resembled what we commonly know as a box of Morton salt. It sold for fifteen cents.

Lambert attended colleges in Kansas and Iowa, earning his B.S. and master’s degrees before enlisting in the Navy. He served as a lieutenant commander in both the European and Pacific Theaters in World War II. He was honorably discharged in 1945 with the rank of Lt. Commander. His specialty was communications.

Later that year, Lambert moved to Columbia, Mo., with his wife, Ella, to pursue broadcast journalism. While teaching at Stephens College he worked on his doctorate at the Missouri School of Journalism under his friend and mentor, Dean Frank Luther Mott. His dissertation was titled “The Future of Television.” A year later he joined the Missouri School of Journalism as an associate professor. Lambert finished his Ph.D. in 1953 and, as a full professor, proposed to MU President Frederick Middlebush the idea of bringing television to central Missouri while teaching students at the station. Middlebush agreed and on Dec. 21, 1953, KOMU went on the air.

Lambert was the station’s first general manager and also moderated “Missouri Forum,” a public affairs show that he developed and hosted for more than twenty years.

Known affectionately by his students as “Big Ed,” “Easy Ed” and in later years “Doc Ed,” Lambert retired in 1980 after 34 years of teaching and innovating. In 1989, he received the School’s most coveted honor, the Missouri Honor Medal for Distinguished Service in Journalism.