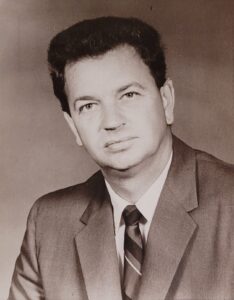 Derry Brownfield was born January 24th, 1932 in Boonville, Missouri. He started farming at the age of 16, before receiving a Future Farmers of America State Farmer Degree in 1949. He then attended the University of Missouri, attaining a Bachelor of Science degree in Agricultural Education, and a Master of Science in Animal Husbandry.

Derry spent a year artificially inseminating cows, and another year teaching inmates at a Jefferson City prison before moving on to teach vocational agriculture for 5 years at high schools in Pilot Grove and Jamestown. He was then hired as a marketing specialist with the Missouri Department of Agriculture, a position he held for 4 years. In 1965 at the age of 33, Derry became the Director of the Kansas City Livestock Market Foundation at the Kansas City Stockyard.

Eventually, he made his move to broadcasting, and he served as the Farm Director at KLIK and KJFF-FM in Jefferson City for 6 years. At the time, he lived on and operated a 1,400-acre livestock farm, making him the only Farm Director in the state of Missouri who was running a full-scale farm operation. It was at KLIK where he met future MBA Hall of Famer Clyde Lear, whom he would end up partnering with to create Missouri Network, Inc, later renamed Learfield Communications to include both of their names. Together they launched The Brownfield Network, and their first broadcast was on January 2nd, 1973. The network served 250 radio stations throughout the midwest, offering farm news and market information including farm facts, crop data, weather reports, commodities news, and opinion. Derry prided himself on “speaking as a farmer, to the farmer, for the farmer, from the farm.” At one point, The Brownfield Network was the nation’s largest agricultural radio network, with Derry even reaching the ears of President Jimmy Carter, whom he met with personally in 1978.

In 1994, Derry started his own syndicated radio talk show, leading him to become one of the most popular radio talk show hosts in America at the time. Brownfield’s “The Common Sense Coalition” was broadcast on radio stations across the country, along with reaching a large audience of shortwave and internet listeners.

Derry passed away on March 12th, 2011 at the age of 79. Later that year, Learfield Communications honored his contribution as a company founder by naming a studio after him. The Derry Brownfield Studio, where he’d hosted his daily talk show for years, is located next to the newsrooms for Brownfield Ag News and Missourinet in Jefferson City.