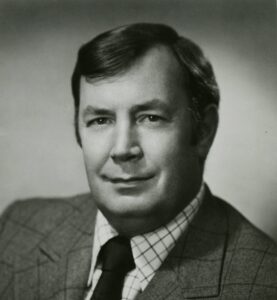 Patrick Daniel “Dan” Kelly was a Canadian-born sportscaster best known as the play-by-play man for the St. Louis Blues from their early existence until his death in 1989, some two decades later.  In  addition to the Blues, Kelly was the lead announcer for national NHL games in both the U.S. and Canada.  He broadcast 16 Stanley Cup Finals from between 1969 and 1988.  Besides hockey, Kelly also did NFL games for CBS Sports, and Missouri Tiger football and St. Louis Cardinal baseball for KMOX radio in St. Louis.  Kelly’s sons, John and Dan, are also NHL broadcasters.