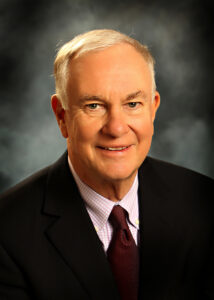 Clyde Graves Lear was born in 1944 in Jefferson City, where he was raised and attended high school. After high school, Lear went to Central Methodist College in Fayette to become a dentist for two reasons: Central Methodist had a good record for placing students in dental schools, and more importantly, his girlfriend, Sue, was going there.

At Central Methodist, Lear joined the staff of KMOE, the campus radio station and loved everything about it. Radio became his life’s passion during his four years there. In his junior year, he switched from dentistry to journalism.

After his junior year, Lear was recruited to sell books door-to-door for the Southwestern Company. For the next four years, three months each summer, he knocked on doors in Kentucky, North Carolina and Pennsylvania. His quota was 30 demos a day, 6 days a week. The work was hard and he made good money, but more importantly, he learned the art of selling. In his last three summers, he was in charge of a team, so he also learned how to manage. In fact, Lear says his four years with Southwestern were as valuable as his college education.

Sue and Clyde graduated from Central Methodist in 1966 and were married the day before their graduation. They moved back to Jefferson City, where Sue taught 7th graders and Clyde commuted to Columbia for graduate school. He received his Masters in Journalism from the University of Missouri in 1968. He wrote his master’s thesis on providing statewide news.

Clyde was a news reporter at KLIK in Jefferson City from 1968 to 1972, making $85 per week. He had the fortune of working for Bob Priddy, covering city council meetings, school boards and the Missouri legislature. Priddy became Lear’s mentor and taught him valuable lessons about news. But $85 per week was not enough for a 24 year old with a wife and child, a masters degree and four years selling experience. Lear begged management to let him sell, but was told to get back to the newsroom.

Lear quit his job at KLIK to sell Perma-Bind, an asphalt sealer for Buell Baclesse, the owner of a successful lumber company in Jefferson City. Lear was back in the sales game and it felt good, but he never stopped thinking about and working on his statewide network idea. He teamed with Derry Brownfield, an experienced farm broadcaster from KLIK who had a strong personality behind the microphone. Together, they planned and eventually founded Missouri’s first farm network.

Lear finished writing the business plan for what would one day become Learfield. Buell Baclesse put the financing together, and in November 1972, the Missouri Network was incorporated, and opened its studios on West Dunklin in Jefferson City. Lear immediately hit the road in his VW bug and began pitching affiliates on the new Missouri radio network providing daily, local farm news and programs. The first broadcast on January 2nd 1973 was sent to nine affiliates across the state. Clyde operated the equipment and Derry talked. In a memo to their affiliates, they described themselves as “good, not fancy.” Missouri Network eventually spread beyond Missouri and was renamed the Brownfield Network. Today, it is the nation’s largest agricultural radio network. Derry Brownfield died in March of 2011.

In 1974, the Missourinet news network was created to complement the farm network. Lear hired Bob Priddy, his former boss and mentor, as the first News Director, a position Bob held until his retirement at the end of 2014. Missourinet currently has 62 statewide affiliates.

Learfield (a combination of Clyde LEAR and Derry BrownFIELD names) Sports launched in 1975, with the radio rights to the University of Missouri football and basketball, Lear’s first college marketing partner. Learfield Sports made history and national headlines in 1981, when they bid $6 million for the broadcast rights to Mizzou. Today, Learfield Sports has more than 800 employees and represents nearly 100 colleges.

Clyde Lear retired in the fall of 2011. Later that year, Learfield Communications sold to Shamrock Capital Advisors. The company was sold again to Providence Equity Partners in the fall of 2013. Lear remains a leader and proponent of higher education. For 13 years, he served on the Central Methodist University Board of Curators, and was its Chair for five years. He is a member of the 1992 Class of Distinguished Alumni from the University of Missouri, and was enshrined in the Missouri Sports Hall of Fame in 2012.