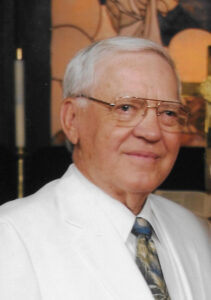 Charles Earls was born in Wyatt, Missouri, the youngest of 7 children. He attended elementary school in St. Louis, and graduated in Steele, Missouri in 1956.  He was an Air Force control tower operator in Chitose, Japan, where he developed his love for radio.  He was also a local disc jockey on the Air Force radio station.

His first paid job in radio was for Harold Sudbury, Sr. at KLCN in Blytheville, Arkansas in 1960. That’s where he met and married Scottie Jolliff. A son, Charles Scott was born in 1961. With a new family, Charles decided to make radio his career and answered an ad in Broadcasting Magazine for a job in Waco, Texas.  KAWA was a 10,000 watt daytime AM station where Charles was hired as a salesman and weekend newsman. Within six months he was the manager. An Illinois newspaper company owned the station and Earls moved his family to La Salle/Peru, Illinois, to put a new FM station on the air for them. He worked on the newspaper side as a salesperson for a while until he was able to fulfill his dream of owning his own radio station by purchasing KTHS in Berryville, Arkansas.

The Earls moved to Berryville in 1966 and Charles started attending the Arkansas Broadcasters Association meetings. Later that year, KBOA & KTMO in Kennett, Missouri became available, and in October, the Earls’ bought those stations and moved to Kennett, while still managing KTHS.

In the coming years, they added Missouri stations in Farmington, Branson and West Plains, a station in Creston, Iowa, as well as Arkansas stations in Mountain Home and Yellville.

Charles was also very active in the Missouri Broadcasters association, serving as President from 1975-1976.  He received the Distinguished Broadcasters Award and the Lifetime Member Award. The Earls retired in 2015 and sold their stations in 2018. Charles passed away on July 25th, 2022.