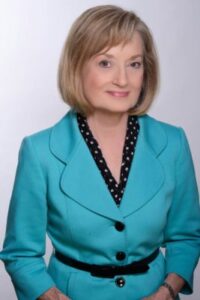 Betsey Barnette Bruce, St. Louis’s longest serving television journalist, covered politics, education, general news and the business side of sports. She began her career as a junior high student journalist in Western New York writing school news columns for The Tonawanda News. Her first broadcast work was on WBEN radio in Buffalo, NY as a Girl Scout correspondent from the 1965 National Girl Scout Roundup in Farragut, Idaho. While attending the University of Missouri School of Journalism, Bruce edited the student paper, The Maneater, and was the first female undergraduate to anchor a KOMU-TV newscast. She received a Bachelor of Journalism from MU in 1970.

Bruce was the first fulltime female TV street reporter in St. Louis. She anchored newscasts at two stations, KMOX, now KMOV-TV, and KTVI-TV during her 46-year career. While working at KMOX (Channel Four) she was part of the team that pioneered “live” reports with portable video cameras and microwave technology (known as ENG or electronic news gathering). Her career spanned multiple technologies from 16mm film to video tape formats to digital video and social media.

St. Louis viewers often tell Betsey they grew up watching her. Although she specialized in covering public policy and political stories, Betsey was also known for spot news coverage ranging from the floods of 1973 and 1993, to court ordered school desegregation and the unrest in Ferguson prompted by the shooting of teenager Michael Brown. In 1994, she received the Women in Communications national Clarion Award for investigative journalism for a series of stories on the St. Louis County Special School District.

Over the course of her career she covered 11 national presidential nominating conventions and every governor in Missouri and Illinois between 1971 and 2016. As host of KMOX-TVs public affairs show “Newsmakers”, she interviewed local and national figures including Gloria Steinem and Phyllis Schlafly on the ERA, David Duke of the KKK, Malcolm Forbes and Jacques Cousteau.

In 2018, the St. Louis Press Club named her its Television Media Person of the Year recognizing her for breaking barriers in the profession and for her knowledgeable and reliable reporting.

Among her favorite assignments were political stories including interviews with the mothers of three presidential candidates with local connections and reports about the roles and contributions of women in our public life.