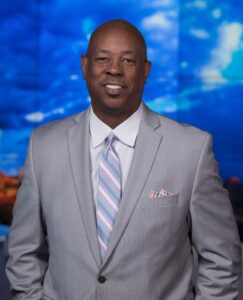 Art Holliday’s broadcasting career spans 45 years in news and sports, including more
than 40 years at KSDK. In December 2020 he was named interim news director, and in March 2021 he became the permanent news director.

Art came to 5 On Your Side in 1979 and worked as a sportscaster until 1989, when he began a 22-year stint co-anchoring Today in St. Louis with Jennifer Blome. Besides anchoring, Art served as managing editor and twice was executive producer of the morning newscast. He most recently co-anchored the 4 p.m. newscast alongside Kay Quinn and Scott Connell, and he also co-hosted a radio show on KTRS with Blome. Before joining 5 On Your Side, Art worked in the sports department of KOCO-TV in Oklahoma City for a little over two years.

“The most enjoyable part has been the conversations with our reporters, talking about the craft of reporting and storytelling, talking about their career dreams, and sharing my experiences when it’s germane to whatever conversation we’re having,” said Art. “We have a great staff on multiple levels, and now I get to play a major role in hiring new employees. The goal is for all of us to make each other better.”

Art’s broadcasting work has been recognized with numerous awards, including three sportscasting Emmys in 1985, 1988, and 1989. In 2001, Art was inducted into the Hall of Fame of the Greater St. Louis Association of Black Journalists. In 2002, the National Alliance on Mental Health presented Art its annual Media Award, and the following year the University of Missouri-Columbia selected him for its prestigious Faculty-Alumni Award. In 2009, Art was inducted into the St. Louis Media Foundation Television Hall of Fame.

He is a native of St. Charles, Missouri and earned a Bachelor of Journalism degree from the University of Missouri-Columbia. His interests include tennis, photography, and documentary filmmaking. His first documentary, “Before They Fall Off The Cliff” was accepted to multiple film festivals, and is being used by the Crisis Intervention Team of St. Louis County to train police officers on how to de-escalate encounters with citizens who have a mental illness. He’s currently working on “Johnnie Be Good,” a music documentary about Rock and Roll Hall of Fame pianist Johnnie Johnson.