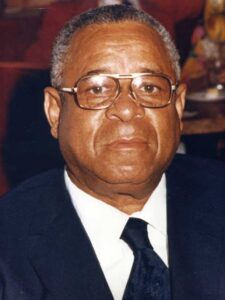 Andrew “Skip” Carter was born in 1919 in Savannah, Georgia, where he built his first radio while still in high school and worked as a radio engineer.  After serving in the Army from 1940-1945, Carter studied physics at Georgia State for three years, went to the RCA School for Electronics and then to New York University.  He earned his First Class broadcast license in 1947.

Carter’s goal was to own and operate his own radio station playing R&B and soul music, but his efforts were thwarted by the racial attitudes of the times.  In August of 1948, Carter wrote a letter to Broadcast Magazine chronicling the difficulties he experienced in the radio industry.  The letter caught the attention of then Kansas Governor Alf Landon, who owned four radio stations.  Landon hired Carter to run one of his stations, KCLO in Leavenworth, Kansas.

Carter turned the station around.  Landon subsequently helped Carter get his FCC license in August 1949, making Carter only the second African American to receive one.  Then in 1950, Carter, again with the support of Landon as owner, launched KPRS in Kansas City, the first African American station west of the Mississippi, playing original songs by African American artists like Ray Charles and James Brown.  The “PRS” in the call letters stand for People’s Radio Station.

In 1959, Carter met the woman who would be by his side the rest of his life and help him build his successful radio company.  Mildred and Andrew Carter married in 1960.  Mildred convinced Andrew to try FM for the clarity and strength of its signal.  In 1963, Andrew received his FM license and was granted a 100,000-watt FM facility.  KPRS moved to 103.3 on the FM dial with a 24-hour format that was simulcast with KPRS-AM on 1590.

The Carters completely controlled the interests in both stations by 1969.  In 1971, KPRS-AM changed its call letters to KPRT-AM and began programming Urban Gospel music 24 hours a day on 1590 AM.

In order to ensure his stations would remain a family-run business, Carter named his grandson, Michael president of KPRS Broadcasting Corporation in 1987.  KPRS has the historical significance of being the oldest continually African American family-owned radio station in the United States.  Under Michael Carter’s leadership, it continues a mission of community service that his grandfather established over 60 years ago.

In January of 1989, radio pioneer Andrew “Skip” Carter died at his home in Florida.

In 1993, KPRS Broadcasting Corporation moved into new offices in the Andrew “Skip” Carter building and was renamed the Carter Broadcast Group, Inc. to honor and preserve the legacy of its great founder.  The broadcast industry also recognized Carter’s life-long achievements when he was inducted into the Radio Hall of Fame in 1996.