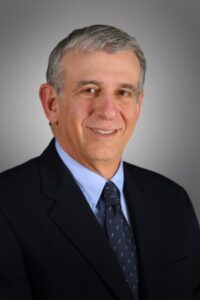 Allan Cohen, who was born and raised in New York, didn’t set out to work in St. Louis television for over 30 years. With an electrical engineering degree, he was solving problems with satellite Doplar navigation systems on submarines in the early 70’s in New York.   In 1974, he earned a master’s degree in management and responded to a want ad for a financial analyst at CBS. He was forced to present an admittedly thin resume. Cohen said, “Everything I did on the submarines was top secret, I couldn’t put it on my resume.”

He was nonetheless hired at WCBS-TV, CBS’ owned and operated station in New York City in 1974. He started in the TV station division, advanced to manager of sales and marketing analysis, and then promoted to Chief Financial Officer. After a few months, Cohen had another change of heart. “I didn’t want to be the CFO. I wanted to run a TV station. I thought it was the coolest job in the world.”

CBS shifted Cohen to a corporate VP role, overseeing personnel for the broadcast group. In July 1980, he got what looked like his big break when CBS said it was sending him to Los Angeles to fill the #2 job at its TV station there. Cohen had already rented an apartment in LA when, only days later, the network told him the plan had changed, and he was now going to St. Louis to become the Vice President and General Manager of KMOX-TV (as it was known then).

Cohen was stunned. “I had no idea about St. Louis,” he said. “All I knew that flying home to New York from the West Coast, passing St. Louis meant we were getting close.” However, Cohen and his wife, Roberta, his college sweetheart, chose to treat the move as “this great adventure.” They thought it would be great for their kids (a son Evan, then 9, and a daughter Stacie, 3). Cohen told his wife, “We’ll go for two years and we’ll live on a farm.” As it turned out, these New Yorkers fell head over heels for St. Louis.

When Cohen arrived at KMOX in 1980, he was the youngest GM ever appointed to any CBS owned and operated station. KMOX had no computers, but had already switched from film to tapes. CBS was testing a “new” ENG system at its smallest O & O. “So many of the things we did then seem so primitive today,” Cohen said. “Syndicated shows arrived in the mail on giant 2-inch tapes, a week at a time,” he recalled. “Commercials were on cartridges, loaded into a cart machine to play in order, if all went well.” Now, the station is entirely digital and all tapes are obsolete.

Cohen’s first test came in 1986, when CBS (after fighting off a costly takeover attempt by Ted Turner) sold the station to Viacom. With the sale came the change in call letters to KMOV, and a change in GM’s seemed certain to follow. “Viacom thought the station was underperforming, and they spent $125 million on the bet it could deliver more profit,” Cohen said.  When asked why the station wasn’t making more money, Cohen said, “CBS policies were the problem,” and he promised, “I can triple the operating income in the first year.”

Cohen made that goal, and became notorious in media circles for preempting more than 100 hours of CBS programming to sell more commercial time. However, while some of his preemptions increased revenue, others were used to benefit deserving local causes and institutions. Cohen commissioned and aired specials on the St. Louis Symphony Orchestra, Forest Park and the St. Louis Zoo. He aired the St. Louis Variety Club Telethon for over 25 years and raised more than $30 million for the special needs of physically and mentally disabled children of St. Louis. He devoted hours of air time to the Repertory Theatre of St. Louis and the St. Louis Art Museum. Allan Cohen believed and proved the real way to maximize profit was to maximize KMOV’s impact on the St. Louis community.

When Belo Corp acquired KMOV in 1997 in a three-way station swap, Cohen again stayed on and said working for journalism-oriented Belo was a great experience.  “As I got to know them, I wondered where these guys were my whole career.” Peter Diaz, Belo’s President of Media Operations said, “Allan and his staff made KMOV an indispensable part of the St. Louis community, providing quality journalism and innovative programming, while giving back to the people of St. Louis by tirelessly supporting many charitable causes.” Cohen says quietly, “We did a lot of good here.”

Allan Cohen’s broadcast career spanned some 38 years. During that time, he was both President and Vice President of the St. Louis Chapter of the National Association of Arts and Sciences. He served on the Boards of Directors of various organizations including the St. Louis Symphony, St. Louis Variety Club, Paraquad, Junior League Advisory Board, CBS Advisory Board and the Missouri Broadcasters Association.  He retired from KMOV in 2012.